6 Reasons Why Breastfeeding is Important 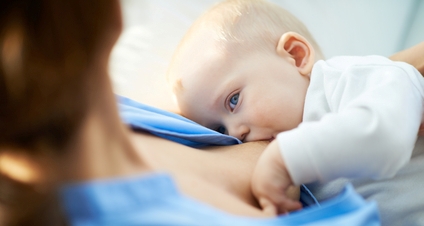 Breast milk or baby formula? It is widely known that breast milk is the better option, but sometimes it’s not a possibility. When making the decision it is very important to consider what is best for you and your baby! Consult different resources (articles, websites, books) and weigh the pros and cons based on your lifestyle. Mom-to-be? This blog lists 6 reasons why breastfeeding is the best option for your baby (if possible, of course)!

Most of us already know that breast milk contains vitamins and nutrients that help your baby develop in the first six months of life, but did you know that the benefits are beyond just nutritional ? Breast milk contains thousands of distinct bioactive molecules that protect against infection and inflammation and contribute to immune maturation, organ development, and healthy microbial colonization.

Babies who are fed formula based on cow’s milk or soy tend to have more allergic reactions than breastfed babies. There is an immune factor such as secretory IgA which is only available in breast milk, provide a layer of protection in babies intestinal tract. Without this protection there is inflammation and undigested proteins which can cross the gut and cause allergic reactions and other health problems. Without this layer of protection, babies are more vulnerable to inflammation and allergies.

There have been recent studies that have shown that the longer women breastfeed the more they protect themselves against breast and ovarian cancer. The reason is not entirely clear but it may have to do with the structural changes in the breast tissue and also the fact that lactation suppresses the amount of estrogen the body produces. Researchers also think that the suppression of estrogen may also be the cause for the protection against ovarian cancer.

Another important aspect to consider is the Psychosocial affects that breastfeeding has.  The mother experiences a sense of bonding or closeness with her newborn. In addition, although the literature is not conclusive on this matter, breastfeeding may help to lower the risk of postpartum depression, which is a serious condition that almost 13 percent of mothers experience. This disorder poses risks not only to the mother’s health but also to the health of her child, as the mother is unable to fully care for her infant.

There are also economic effects that people don’t often talk about. A study conducted more than ten years ago estimated that families who followed optimal breastfeeding practices could save more than $1,200–$1,500 in expenditures for infant formula in the first year alone. Another point to consider on this matter is that better infant health means fewer health insurance claims, less employee time off to care for sick children, and higher productivity, all of which concern employers.

Breastfeeding also has global environmental benefits. Human milk is a natural, renewable food which acts as a full meal for your newborn. This means no packages pilling up in landfills and no pollution in the air from the trucks carrying baby formula from the distributer to the store shelves or from your own car to the store to pick it up.

When Breastfeeding Isn’t an Option…

While breastfeeding has many benefits, it is important to note that sometimes breast-feeding isn’t possible and that’s ok. There are many valid reasons a mother may choose not to breastfeed. For some mothers the newborn won’t latch, for others breastfeeding hurts too much. Or some simply can’t manage it with their work schedule. If breastfeeding isn’t a possibility, talk to your family chiropractor, naturopath, nutritionist or physician about different options that may help you with whatever issue it is. There may be a way help you that you may not know about.